Tonight I'm thinking about my dad, Milt, who turns 94 years old on  9/10/2011.  Milt is amazing - he continues to live with my mother in the home they bought in the late 1940's.  They moved from York, Nebraska, US where they had both grown up to live outside of Caldwell, Idaho.  They had not visited first.  They knew no one except Milt had an uncle who had a farm to rent or sell. Milt had farmed through the dust bowl years in the midwest and the lure of irrigation water and plenty of it was strong.  The country was working its way through very difficult times, not unlike now.


They loaded everything into a railroad box car, including a new tractor and 2 heifers (young cows about to give birth for the first time), the dishes packed in flour in barrels. Dad rode on the boxcar for the 3 day trip to Idaho.  Uncle Jack met the train as it arrived in Caldwell.  They got things unloaded and the livestock set up with food and water for the night on the new farm. The next morning, one of the heifers had given birth to a healthy calf. What an arrival!

My mother traveled with a 2 yr old and 3 yr old (my older brothers) as her parents drove them to Idaho. My Gramma Eva had been very close to the children and was not at all happy with my parents moving their young family so far away. So my parents farmed and raised 4 children there. They continue to live there to this day. The house has been remodeled, renovated, improved and now has had adaptations made by my brothers for older adults to live comfortably. 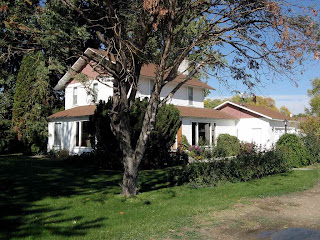 When Lenny and I told my parents and brothers (and other extended family) we were moving to Cuenca, EC, my parents were not too happy.  It is understandable.  4700 miles is a loonnnnggggg way!  Skype calls help, regular magic jack calls are good too.  We hope to visit them in 1-2 months.  I understand their feelings... I long each day to see my grandchildren and kids.  I know it is now going to be more like 1 time each year that I will see them. I face the reality that my grandchildren will grow up not really knowing me and I cannot pop over from Portland on a $99 flight for a quick visit.  Yet, I also understand what drove my parents to strike out on a new path... .to make their way in the world as they saw best.  Just as Len and I have done in moving to Cuenca. 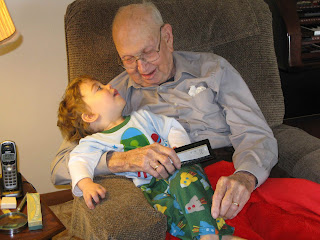 Milt in 2009 with great-grandson Blake, Tenley and Todd's son. Playing the harmonica followed.


So Happy Birthday to Milt.  You've been a good teacher, a wonderful parent, a great model of how to be both strong and gentle at once -  as a parent, a farmer, a community worker, a friend.  I have many stories I could tell of your humor, your strengths, your trials and triumphs but I will leave it at this.
Happy Birthday Dad! I love you.
Sharon
Posted by Sharon at 5:43 PM