CUENCA: Part 2    Does this 3rd world city have dirty streets and unclean water?
This stereotype of Ecuador by some people is really not accurate: the streets of Cuenca are spotless. I have not spent any significant time in other Ecuadorian cities but Cuenca is a clean, friendly, beautiful Spanish colonial city nestled high in a basin in the Andes Mountains. The water tumbles out of the higher mountains surrounding Cuenca.  There is a treatment plant at the edge of town and most people drink right from the tap in the city of Cuenca.  Outside of Cuenca, bottled water is a very good idea. I personally recommend using probiotics (available over the counter at your local drug store)  for a couple of weeks before you come and the first few weeks you are here. Check with your own doctor to be sure this is a good product for you.  It builds healthy flora in your intestines.  This is not medical advice, of course.  Just a personal opinion. And some people drink bottled water, soda or beer all the time. 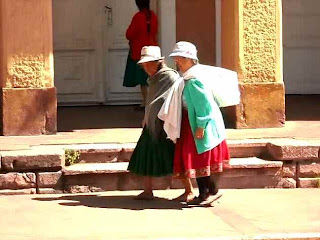 Back to the streets:  you see are people quietly cleaning the streets the old fashioned way - walking along sweeping and picking up trash at all hours of the day and night during the week and yes, even on week ends.

At the recent festival of Corpus Christi, there was a huge celebration each night in the main park around which this city revolves - Parque Calderon. It included a street fair going all day  with food, entertainment, people of all ages passing through hour by hour all evening. Many people were milling about, eating, laughing at entertainment. The crowd had that happy roar that accompanies a celebration. People were having fun.
Each evening of the festival, several paper and wood castles was constructed around Parque Calderon. At 9 pm, festivities would reach a climax and the castles were lit on fire.  For anyone who knows the complications of managing an area used for a multitude of things during a festival, you know this could be a nightmare. And yet... Crowd management appeared to be very good. During Corpus Christi, the plaza in Parque Calderon was actually hosed off and scrubbed each night following the burning of the "castles". Men quietly appeared in rubber boots and work overcoats, carrying large hoses. These workers showed up all around the plaza with large brushes, brooms and suds and cleaned diligently so that the plaza appeared fresh and renewed the next morning. 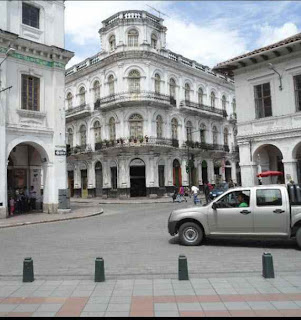 What about concerns regarding the environment?  Well, this is a huge complex subject and gets political pretty quickly so let me just comment on what I have observed:
Recycling is picked up 3 times per week at the front of your property.  There are special BLUE recycle bags to separate as you discard things throughout the week - all recycling goes in the BLUE bag.  I rinse the items out of habit but recyclables are tossed into that BLUE bag to recycle. After the city picks it up, it is sorted into specific types of recycling and much of the materials are, well, recycled..
However BEFORE it is picked up at the curb,  it already is screened.  Impoverished indigenous people move slowly along the street the day trash and recycling are put out, quietly sorting through both trash and recycling bags, placing items in a bucket or basket carried on the back of an elder family member.  I was told by someone that they collect cardboard and make a little money by turning it in. There may be other items as well. In front of the building where I live, it is often an older couple or a young woman with a small child wrapped on her back, working alongside an older person, possibly from the same family. Things are not just thrown out here.  Parts are recycled.  Items are repaired.  New uses are found for items that no longer work.
Ecuador is a democracy and uses the US dollar for currency. President Raphael Correa just announced that he hopes to have a bottle bill passed very soon.  A deposit of 5 cents would be on every bottle, I believe on either glass or plastic.  The 5 cents is refunded when the bottle is returned.  The idea was not popular with some people but...we know about that in the US also.
The stores do not use paper bags at all. The plastic bags they use are a thinner product than I've seen in the US so that probably saves in some tiny way toward a greener environment. Many people carry bags and baskets for shopping.  We brought ours from the US because we had read on another blog that it was recommended due to better quality reusable bags.
But what about the Amazon and all the natural resources Ecuador enjoys within its borders? What about deforestation and oil drilling in the Amazon?  That is a HUGE subject beyond my musings so I'll let another blogger tackle that one.
What about MEAN STREETS?
Here is another myth buster for me: I pictured that Ecuador would have "mean streets" with primitive buildings, frequent crime and broken down buildings with flaking paint.  Well, one can certainly find this situation in Ecuador and even in parts of Cuenca.  And yet Cuenca is a beautiful city with a lot of light adobe, tile roof and "terra cotta red" brick, giving the city an ethereal rosy glow at dawn and dusk.  There is construction everywhere, with modern buildings going up next to Spanish colonial gems that have been restored and well maintained.
A 4 word description? This city is beautiful! 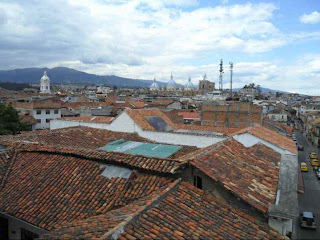 The city has many diverse, friendly people who live in apparent racial harmony and religious tolerance.  I find the people of Ecuador to be very hard working, generally cheerful, with many skills, a friendly attitude and a gracious way of interacting with you.
If you are coming here, learn at least a few basic phrases in Espanol and try them out with shop keepers, in a taxi, asking for directions.  Ask how a person's day is going.  Showing a little respect and interest goes a long way.  More thoughts/info on Spanish language in another post. 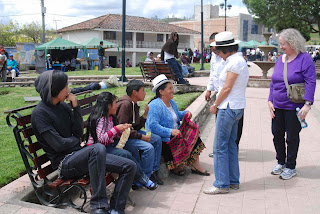 A city brimming with history and architecture from the 1600s and before. There are Inca ruins within the city itself.  In the old part of the city, there are numerous restrictions on how buildings may be altered to keep the integrity of  the Spanish colonial architecture.  Cobblestone streets are painstakingly repaired.  Although  I will point out that plenty of sidewalks and spots in the streets need repair. One has to get used to walking carefully with one eye on the ground as strange holes sometimes appear in the middle of the sidewalk. Other times, the walk simply gives way to chunks of gravel and cement.
And what about those" mean streets"?  Let me state that I am not an expert on crime. There is crime everywhere in the world, as we all know.  If one exercises precautions that are recommended (i.e. do not wear flashy jewelry, do not carry a camera or purse of any sort into a crowded market, do not go into certain areas at night, remember you are a guest here and do not challenge customs and people in your daily interactions) the likelihood of crime decreases.  Also, come on guys, we need to adapt to the predominant culture. If you moved to New York City, you would learn ways that you'd need to be cautious and wise about safety there. Remember, I am expressing my opinions here, not saying what is right for other people. 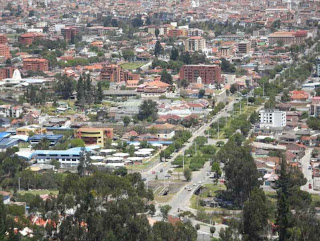 If one observes these and similar good sense approaches, Cuenca is as safer than many cities in America.  Crime still can happen.  Be prepared psychologically to handle this if something befalls you, such as theft of a phone or being the victim of a pickpocket. A lot of how we handle things and recover from difficult events in life is  our mindset.  If we think we can handle something, we probably will.
As a former mental health therapist who worked with trauma victims, I recommend presenting in an assertive confident way.  By that I mean walk with good posture and a confident stride.  Do not wander along looking vulnerable and lost. Take note of your surroundings. LOOK at what is happening around you, be aware of the "tone" of an area.  Ask locals if an area is safe for walking, go out after dark with other people - not alone.  Common sense stuff a person should exercise in New York or Berlin or Quito.
Other bloggers in Cuenca have given more extensive, well-thought out recommendations about staying safe so check that info out. 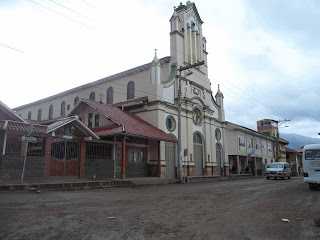 My husband several times has traveled to a village/neighborhood called San Joachin. Above is the town church.  The streets are dirt and were very rutted on this rainy day.  The tiendas (small markets) look like they probably did in 1950.  If Butch Cassidy and Sundance had come riding down the street, I would not have been shocked.  And yet, it is a lively little community when  you look a little more closely.  It is the cabbage growing capital of all of EC.  The popular Coopera food cooperative has new headquarters there. The little community clearly is a community with pride.  So not really such "mean streets". 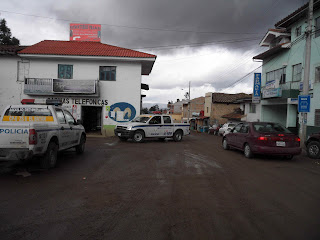 All this said, we love it here. I cannot say enough about how kind and helpful most Cuencanos have been to us.  They are curious about visitors and newcomers.  They will speak a little English often if they know that you are struggling with your Spanish and it goes both ways. MANY times someone has said to me "Oh, I'll practice my English if you say words in Spanish."  And  I must say...the people are physically gorgeous.  Many different looks but a very handsome population with that noteworthy thick shining black hair. OK, I have hair envy, I'll admit it! 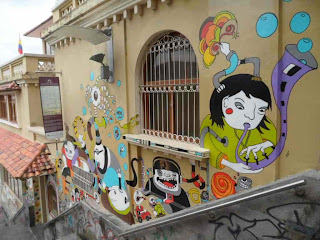 This is our 9th week as citizens of Cuenca and we just marvel every day at the joy and challenges of living in a new culture, an exotic new continent, and a beautiful new city!
Next:  Part 3  Why Isn't Cuenca more Tropical?  Isn't it Basically on the Equator
Posted by Sharon at 7:43 AM