Retire to Cuenca, EC: Different and yet the same

Happy Weekend!
What is Cuenca, Ecuador really like? Part 4 of 4 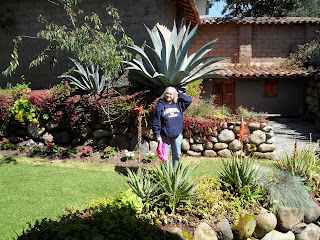 I was told recently by someone who has never lived outside the borders of the US: "Well, Ecuador is just a little farther south but pretty much the same as Mexico in terms of diet, people, music and everything, right?"
I sort of stared at him, feeling rather taken aback, trying not to let my jaw drop.  And I felt a need to grab this "teaching moment". Especially since I, not long ago, had a few similar stereotypes and lack of geographic knowledge.

The geographic distance from, oh, let's say Mexico City to the where I am living in Cuenca Ecuador is approximately 2000 miles (3219 kilometers), or about the same distance as Portland, Oregon, way over on the west coast, to New York City, way over on the east coast.  2000 miles is a long way! Central and South America encompass lots of regional differences, lots of different histories. To me, it does not seem realistic to expect things to be "the same". 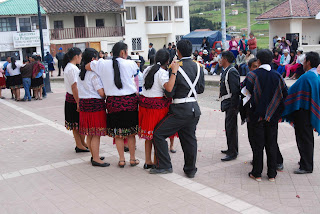 However, here is  a favorite picture of mine because it shows the behavior between teens to be similar around the globe - the wish to connect,the looking while trying to appear not to be looking, the standing closer but not knowing how to connect yet... seems universal.

Just as one cannot say that Canada and the US are the same, it cannot be said of Latin American countries. Each country in South America and Central America has their own identity, with perhaps some similarities in culture and cuisine but also many many differences.  I hope one day to travel around South America to learn more about these similarities and differences.

Already in my short time residing in Cuenca, I have observed a national pride among many people in this country, a national identity.  I have seen it when they talk of football, when they discuss practices within the country such as eating food grown in Ecuador first rather than buying imported goods, when they talk of crime, when they talk of festivals and dance. Ecuadorians are aware of differences between people from the coast and those from Cuenca or Quito, for example.  But they also cite ways they work together and communicate easily about many things. Generalizations just don't work, anywhere in this global community. 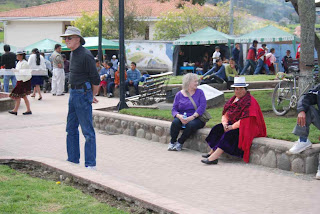 So what about being a minority of the non-hispanic Caucasian, citizen of US variety in the larger culture of Ecuador?  Well I need more than 9 weeks to know much about that.  But I can say that Cuencanos tend to be initially more friendly than the people of some places I've visited or lived.  It appears to be easy to begin to get acquainted with Cuencanos. They seem to be an accepting and outgoing people, generally.  Is this is partly due to the Latin American way of life? My husband walks all over the city, rides buses and feels very safe.  He stated he feels safer here than he did on the bus in Portland.  He practices the recommended precautions of not carrying much cash, not flashing expensive gadgets around (such as an expensive camera or phone) and understands that crime like pick pockets can occur anywhere. 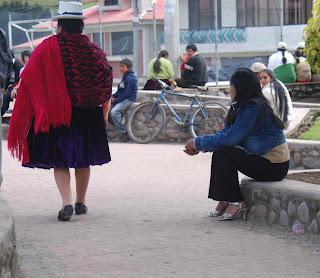 Here the woman dressed in older traditional clothes and the modern woman on the right in tight jeans and heels both are in the village to celebrate a festival. and unconsciously demonstrate the struggle between traditional ways and modern ways among indigenous people.

Indigenous children often take a second and third look if we are riding the bus which is mostly used by working class Cuencanos.  The really young children will smile shyly or even touch your back if they are seated behind you.  We are different looking to them. It is ok for them to wonder about these different looking people.  There is a sweetness about this that touches me. 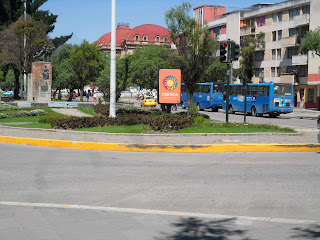 Is the open friendly nature of the people of Cuenca somewhat because this part of Ecuador was not really accessible until the 1950's  when well paved roads were completed, allowing Cuenca to be visited by many more people.  Is it possible they have less influence from "possession hungry America" and have had generally positive experiences with people from Estados Unidas (US)? 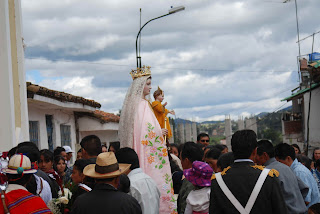 In the village of Tarqui, at the celebration of the festival of the Virgin Carmen.

Indigenous or native people are often less willing to talk to a foreigner, more shy, less open to having their pictures taken.  They are very hardworking and have exceedingly strong family values, in general.  There are many middle class people in Cuenca who are working hard to have a higher standard of living.  And there are very wealthy people in Cuenca who sometimes have some lineage going back to Spain.  They often are struggling to raise standards for the good of social issues, such as improving orphanages or working on environmental issues.  Although of course, people from any group may be working on each of these issues.  I do not mean to generalize but to give some idea of the tone of Cuenca's population.

I am distressed personally to see Kentucky Fried Chicken and Burger King here in Cuenca to name a couple of the handful of fast food joints popping up here.  Distressed because, to my way of thinking, this represents some of the worst of the US: fast food with high, empty calories. Distressed because this may signal many changes already in progress toward less healthy eating, less family connection around meals at home, and other ills similar to this. Keep the healthy eating and family values! 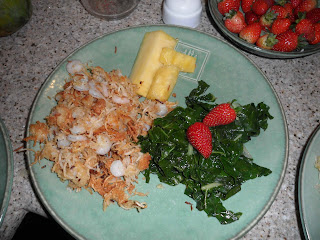 Gluten free coconut shrimp with fresh pineapple and steamed chard picked that morning (with a little olive oil and garlic - yum!)  These strawberries did not measure up to Oregon's best but it may be that it is winter here.  But this is a wheat free dinner I can really get behind!  In a couple of posts, I'll discuss the challenge of being wheat free/gluten free in Cuenca.
But back to Cuencanos. Many seem to have their own version of being warm and open to the world.  Some of the Cuencanos I have met have not shown the initial caution and hesitation people of my former neighborhood in Oregon would have shown.  I find I like that quite a lot!  The greeting of a quick hug and cheek kiss is a great way to start out and end interactions. It seems one can be friendly and still hold back judgment about a person until you get to know them. What a concept!  And it just naturally feels better to be open and friendly than it does to be reserved, cautious and frightened, which is a chilly place to occupy. Fear is a crippling emotion and much of life in the US has been immobilized by fear in the past decade.

HOW TO BLEND IN?
Well, it is OK to face up to reality if you are obviously not a native Ecuadoran. It is pretty impossible to blend in if you don't speak Spanish well and you have the skin of a Scottish barmaid and rather thin light gray hair! Hiding in a crowd is not easy.  But that can be accepted with good humor.  People from other countries who are English speaking are referred to as "gringos" here and it is not usually said in a rude way but with a wry smile and shrug.
As a new person in this country, I want to present as a pleasant, self assured but not pushy woman. I want to embrace life in Cuenca with my own timeline. I want to learn about and honor this culture.  If I need assistance, I ask a shop keeper in a polite manner -  using just a few words of Spanish is usually met with a generous effort to help.  People will help you if you are disoriented or cannot find what you are looking for and you let them know it. But basic Spanish is required. And good judgment in who you ask.
I was told by someone who grew up in a South American country that the Latin American way to greet a person is to ask how they are, take time to ask after their family or where they come from.  Then, it is time to ask a question or get to the point.  The first exchanges cannot be left out or skipped - it is seen as very rude.

Again, these are my observations and opinions after living in Ecuador for just 9 weeks.
I hope you have a wonderful week end and a new week about to begin.
Sharon 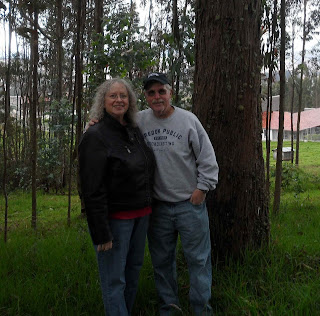