Layering the quilt and Pacific Sea Bass for dinner

Today's post comes as Cuenca,  in the Province of Azuay, is about to conclude 5 days of celebration of their 195 year independence from Quito (sort of like Idaho becoming a state separate from the Oregon Territory -which was in 1863). Many visitors, many people off work,crowded parks, stores closed, fireworks, a terrific arts and crafts festival  -  all were part of this week. 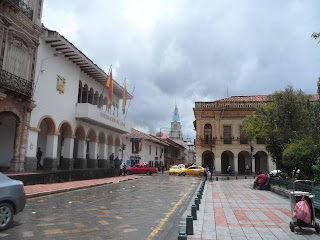 [NOTE: In today's post, I added some Espanol phrases to translate what I wrote (just before the phrase) in English.  Along with my budding skills in Espanol, I used Google Translate a lot so... forgive me, Rebe and mi amiga in Espana Sully. Maybe one year from now, I'll be able to translate correctly myself as I keep learning Espanol.] 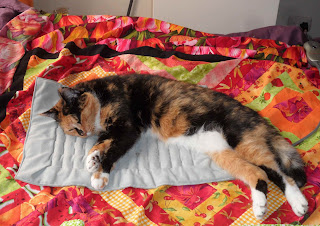 This is the king size quilt top I'm working onand writing about today.  Notice the cat just can't seem to relax.   The heating pad is not on - she just loves to lie on it. 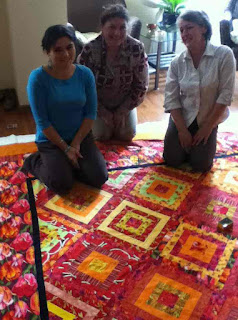 My friends, Bernardita, Maria Elena and Rebeca arrived right on time to help me layer this huge quilt. Estefi could not come but promised to help on another layering.


Just before they arrived, it was time to mark the center of my backing that I had spliced together a bit on Monday.  I bought 8 1/2 yards of fabric but because of the width of the quilt top, I needed 9 yards.  So I got creative and spliced in an orange "racer stripe". With that and a couple of extra seams it was completed and ready to go.  I marked the center and laid it out on the floor.
Fabric Note aside: I bought this fabric online from equilter and had it shipped to Florida and then on to us by the service Correos.  It takes a long time (2-4 weeks from Florida) but we have had good luck with things arriving. No duty is charged as long as the package is under a certain value and weight. We pay $5/pound on any package that arrives in Florida to come on to us. 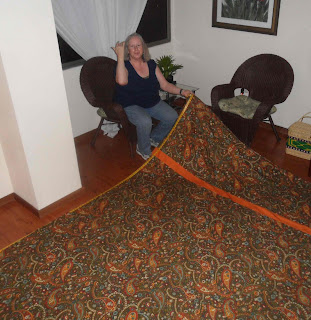 Just then, my wonderful "quilt crew" arrived to help. Three wonderful women of Cuenca: Maria Elena, Rebeca and Bernardita worked hard and offered their opinions throughout the process, making it really fun. I love that each woman expresses her opinion and is not too shy to speak up if something did not make sense or did not seem right. One question Bernardita and her mother Maria Elena had was "why are you putting this beautiful fabric on the back of the quilt where it won't be seen.  I pointed out that it would make the "bedspread quilt" versatile as it would be a two sided "bedspread quilt", giving the bedroom a different look when flipped over.  They both understood and could see the advantage of that.


So we got on the floor on hands and knees and each one of us had a corner/quarter to work to get it smooth, work out wrinkles and uneven spots, while keeping it centered. Everyone worked hard for about an hour. Even with windows open, it seemed very warm (mucho caliente), although it was not much over 70 degrees outside.  This step in creating a quilt is hard work, mucho MUCHO trabajo.


Bernardita is an architect so she took right to the process. I can see that she would be a great project manager because she quickly saw what was needed and grasped the whole process as well as individual parts.  She is also a very dear perfectionist so she kept us working to get every wrinkle out.   When we had all of the layering completed, there was one stubborn wrinkle that we worked and reworked without success. 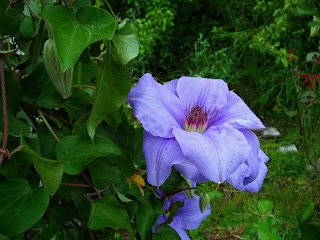 Finally I said sweetly   "Bernardita, if I were entering this quilt in an art festival, I'd keep working to resolve this.  But this is going on my bed so it does not have to be perfect.  This is just for our bed. (esto es solo para la cama).  And when I see that wrinkle, it will remind me of our time together today - its a good thing. (Y cuando veo que se arrugan, se me recordara de nuestro tiempo juntos hoy en dia - es una buena cosa.)

Rebe and Maria Elena sighed, Bernardita understood and we decided it was "good enough"
lo suficientemente bueno, and will be gorgeous. My quilts are not made to be hung on a wall, generally.  They are made to be used and washed, enjoyed and hopefully cherished by the owner. I actually think a few imperfections do not detract and even show a slice of humanity in the creator. Like life - nothing is without flaws." (Translates roughly to"Mis colchas no estan hechas para ser colgado en una pared, en general. Estan hechos para ser utilizados y se lavo, disgrutado y espero apreciados por el proprietario.  De heco, creo algunas imperfecciones no restan, 3 incluso mostrar una porcion de la humanidad en el creador.  como la vida - no esta exenta de defectos.")


Yes, I may be justifying not being a perfectionist, not creating perfect beauty, but that's my philosophy and I'm sticking to it.


This was such a wonderful gift these 3 women gave me - to help with a project that is pretty impossible to do alone, crawling around on the hard floor, trying to get each part straight and smooth. (I hope translateGoogle got this right!  "Este fue un maravilloso regalo estas tres chicas me dio - para ayudar con un proyecto que es bastante imposible hacerlo solo, arrastrandose por el suelo duro, tratando deconsequir que cada parte recta y lisa".

SO MUCH easier with 4 of us!  (Google Translate: "Era mucho mas facil con quatro de nosotros!") 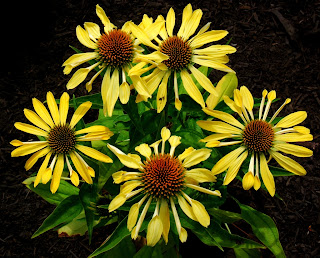 I put the layered pinned quilt by my sewing machine to complete very soon. It was a job well done!  (Fue un trabajo bien hecho!)
I was really elated and really tired.  So the cat and I had a nice nap in the sunshine. I had sweet dreams. Tuve suenos dulces.

I worked on some other things the rest of the afternoon.

For dinner, Len bought fish - sea bass.  So I pulled a recipe out of "The Gloriously Gluten-Free Cookbook" by Vanessa Maltin (available on Amazon).  Let me recommend this book highly. It has Italian, Asian and Mexican recipes. Mi esposo has raved about everything I have prepared from this book.  It gets 5 stars from both of us in a rating system of 1-5.

Try making the tomato-basil bisque sometime - out of this world!  And soups are usually not safe for those who eat gluten free so this is all good.

Tonight's meal was a fresh, delicious dinner.  I tried using a recipe for salmon on the sea bass.  Let me go on record as someone who does not love fish.  I avoid it whenever possible but I know it is good for me, low fat, has beneficial oils, etc.  So we are trying to eat fish more often. And Ecuador makes that easier because it has delicious offerings fresh from the Pacific Ocean. This fish was delicate and delicious. 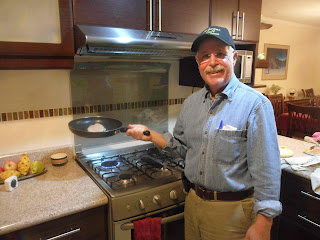 The recipe included coconut rice, which I love.  It called for coconut milk. Since I have not yet sawed/whacked a coconut apart to try making fresh milk,  I experimented by putting dry shredded (unsweetened) coconut into the blender.  I added enough coconut water (bottled) to make the 2 cups the recipe called for.  I blended/pulverized that for about 40 seconds, adding more coconut water when the mixture became very thick.  Then it was looking good and tasted great. Although this method created milk that was a bit gritty, it blended into the jasmine rice/broth to produce a delicious dish. 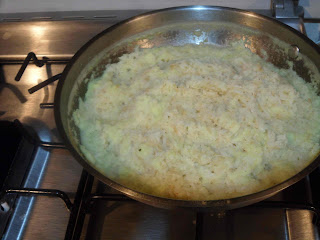 The recipe also includes making a fresh papaya-cilantro salsa to top the fish.  This was a huge hit with Lenny as well as me. 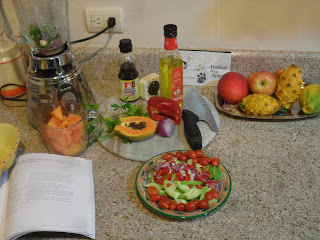 I added an avocado salad to complete the meal. 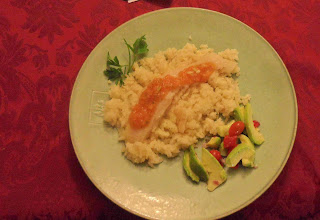 Here is a picture of our dinner.


Tomorrow I'm going to explore some of the Festival of the Arts that is in full swing in Cuenca this week.
LG= Life is good in Cuenca.  I am full of joy. 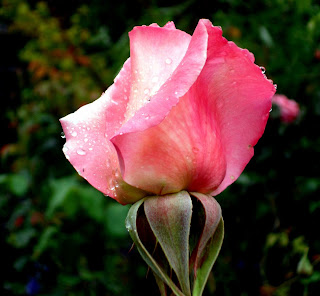