A friend in the US began talking on Skype about Waffle House on Sunday and got a craving going.  The West Coast of the US has no Waffle House restaurants and I'm in Ecuador anyway so....I made gluten free waffles using some blue corn flour  harina morada (the package says 100% negro maiz - grown in Ecuador). I added about 1/3 cup to the usual gf flour mix of brown rice flour, sorghum, corn starch and yuca starch. Black corn sounds dramatic, the waffles were the color of blueberries.

I used some of the ultra-pastuerized MILK  (in a plastic bag kept on a room temp shelf at the store) that I was afraid to try. It smelled like the milking parlor of my childhood farm. Poured in the mix, it was fine. The yuca starch seems to make the waffles rise very nicely, compared to when I use corn starch.

Of course, I added baking soda which is so hard to find here and very coveted, along with the rest of the recipe from a gf cookbook.  The result was quite tasty.  Could be either savory or sweet, depending on topping. Lenny who does not have to avoid wheat pronounced the waffles "delicious!".

Photos of what is still around.  The waffles disappeared before I pulled out my the camera . 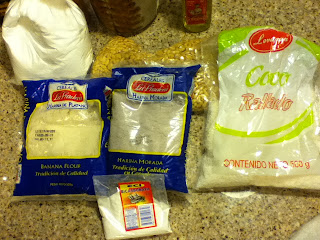 Today I went to a tienda, Cadelaes, on Remigio Crespo Tor and felt like I hit the jackpot. It is a tiny store maybe 20 feet wide - you step up to a counter where you can see a lot spices and other goods but cannot browse or touch.  You quickly ask for what you want and one of 2 staff women complete the transation fast because there are usually 3 or more people instantly waiting behind you needing attention. A friend invoked Seinfeld in desscribing the owner as the "Spice Nazi" (remember the "Soup Nazi" skit?) because she sits back in the corner while her two helpers race from front counter to her desk at the back, asking her where items are.

I saw a HUGE Nestle's chocolate bar, 10 pounds of cooking chocolate, but that was not my mission.
Instead, I found cornstarch, sesame oil, rice vinegar, vanilla and potato starch.  The starches are used in making gluten free flour mix because wheat has a stretchy quality that needs to be somehow created/imitated in gf baked goods.

Oh, they had several types of nuts including pine nuts. Hooray!
And I bought a tiny bag of baking soda. The government requirement of giving passport number, picture ID, phone and local address again occurred because soda is used in some way related to drugs.  I am too naive to know what. But it cracks me up, in a way. The use of the word "crack" was not an intentional pun. 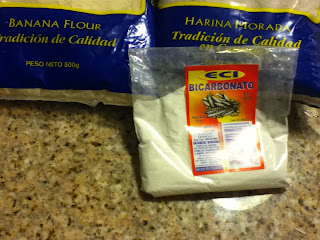 Baking soda in the largest package you can buy.

Next time I go, I will get some chili flakes (I saw them but forgot) and a couple of other things they have there. Paprika.  The sesame oil will help Len get back to making great stir fry dinners - just a touch adds such flavor. I also found out where we can buy fresh "made on the spot" tofu that is great tasting. 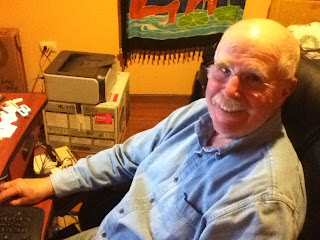 Len is a great chef when it comes to stir fry:

Things are slowly beginning to reside on our pantry shelves so that we can cook a variety of meals more easily.

I did practice Espanol, telling the cab driver directions and I was able to interact pretty comfortably with the tienda senorita (who spoke a tiny bit of English). I had written out translations for the flour, spices and other things I was seeking so that helped. 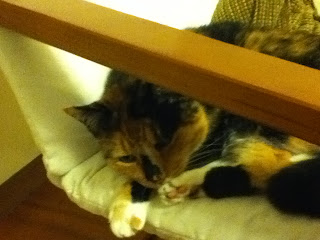 Feisty the cat named it a pretty successful day.

I hope yours was a good day also and that tomorrow is terrific !
Sharon
Posted by Sharon at 8:50 PM