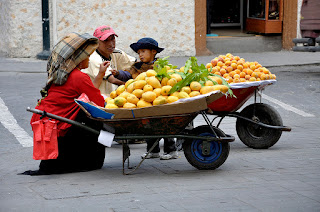 She grew up right in the center of the historic section and described that there were huge fires in the streets back then (about 40 years ago) but now...not allowed.

So next New Year's Eve, we want to explore a specific barrio (neighborhood) in another part of the city to see the effigies burn, representing both current and historical cultural custom - saying good bye to the old year.  It was fun walking around the streets at night on New Year's Eve, seeing lots of Cuencano families going around together, greeting people and just hanging out. It felt very safe and friendly. 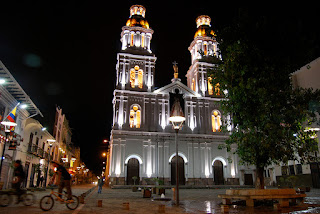 Santo Domingo at night
Have a great week.
Hasta luego,
Sharon
Posted by Sharon at 7:46 AM