A generous ex-pat arranged to pick us up at 6 am to go to an organic farmer's market.  It was fairly chilly at that time so we each wore a warm sweater and a jacket.  There were many vegetables from different vendors.  Probably 200 people  Cuencanos quickly shopping while the supplies were plentiful.  By 10 am they would be all sold out. The vendors were Quechua and other indigenous people in their native dress. Just people watching was wonderful--- but the variety and multitude of organic fruits and vegetables were too tempting to only people watch. 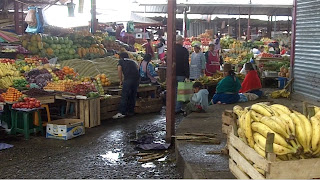 This is a shot of the 2nd market Len went to Sat - reported to be the largest indigenous market in South America. I was home washing the produce from the first market. 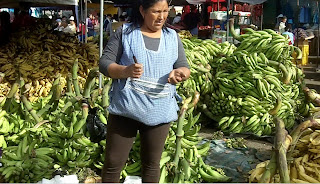 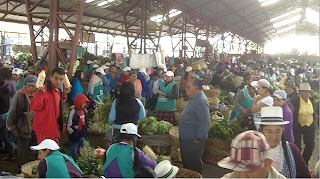 Look at the woman in the white hat in the lower right corner.  Long braids, traditional clothing and very beautiful. There was a group of about 6 people making cheese and corn tortillas - we each had one and it was delicious.

We were back home before 8 am.  Then Len and Gerard went on to the largest indigenous market in all of South America, Feira Libra (I'm not sure of that spelling). Len came back so excited about that market where he bought fish, shrimp and more fruits.  He said there is one whole area that is just onions.  In this picture, the seller is holding a machete to whack off bunches of bananas.  Gerard recommended a "pineapple lady" where he consistently gets great pineapples.  It was great for us to have someone who knows the routine and has some vendors with whom he has built a relationship.


Have a terrific Sunday!
Posted by Sharon at 6:14 AM