Today we went to an animal preserve about 8 miles outside of Cuenca.  The drive there was stunning, curving well-paved road with very little traffic, winding to a higher altitude with huge green valleys and magnificent vistas.  We arrived at a tiny village outside of the slightly larger village of Tarqui. The animal preserve was on quite a chunk of land, built around walkways and viewing platforms.  The animals mostly had large enclosures and all looked well fed and cared for.

There were several interesting creatures native to Ecuador (and a few that weren't). I will have to look up names because I did not write them down.  Most notable were:  some monkeys of various sizes and colors, native to the Amazon region, a few large parrots in large flight enclosures, some small deer, these ring tailed very cute little animals with a nose that showed they could enjoy ants and termites and several birds of prey that included a type of eagle, several types of hawks and a beautiful kestrel. 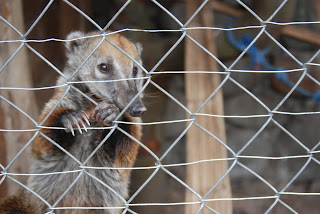 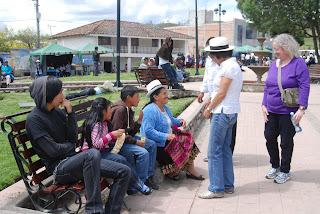 When we were ready to leave the preserve, the taxi driver offered to take us on to Tarqui, only a bit farther (for no extra fare), to see the church.  When we arrived in Tarqui's central plaza, people were pouring out of the church.  The entire village was honoring the festival of the virgin Carmen with a procession and big celebration.  People were in native costume, some wearing masks or carrying ancient looking staffs.  A few people were playing music in the procession and young women were carrying a "Maypole" with ribbons going out to young women carrying large wrapped boxes in their arms.

It was a lucky, happy accident that we arrived just as this occurred.  Len and I felt very privileged to witness this.  There were probably around 125 people there.  Many began eating lunch from the stalls that were selling delicious smelling foods.  A man with a soft ice cream machine in a truck was doing a very brisk business.  The townspeople planned to have music and food and dancing throughout the afternoon. 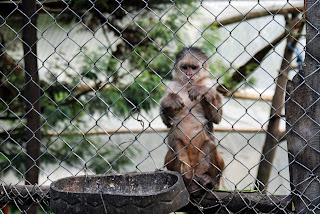 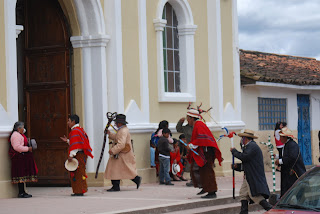